That First Solo Flight
Alone in the Sky

The twenty-nine days from my introductory flight to my first solo passed quickly and uneventfully. I began a twice-weekly routine in which I would awaken early, grab my flight bag full of student paraphernalia, and drive to Coronado Airport (4AC) on Allbuquerque's north side to receive an hour of instruction before reporting to work. The night mountain chill was generally still present as my instructor and I would preflight the aircraft and discussed the day’s activities, but burned off quickly as the blazing sun finally peeked over the towering Sandia mountains.

I like to think that I was a good student, eager to learn but having few preconceived ideas about flying. My instructor, Norm, was an older gentleman, retired from a forest service job and instructing students to pass the time and make a little cash. His style was easy going and gentle, yet no-nonsense. I came to respect him highly - along with any other instructor who would dare to climb into an airplane with a new student. 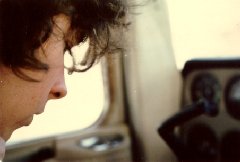 The first few hours of instruction were filled with grueling maneuvers and repetition, often in a hot aircraft, leaving me sweat drenched and depleted at the end of each lesson. There was little time to enjoy the sensations of free flight. I was spending hours, not free as an eagle, but as a captive in a small classroom with wings. It was, however, a very interesting classroom - a classroom that could tilt and climb and bank and drop and bounce. Certain maneuvers were executed to gain proficiency while others were done solely to teach avoidance of and recovery from dangerous situations. They were the basics upon which my entire repertoire of flying skills would be built.

There were days on which I mastered another phase of flight and left the airport feeling satisfied, and yet other days when it seemed that I would never learn the next procedure, or worse yet, that I was losing what progress I had already made. Perhaps this was the perfect preparation for the encounters to come over the next twenty years - encounters that would remind me repeatedly that we are all students, regardless of whether being taught a lesson by a mild mannered flight instructor or a mean tempered thunderstorm.

Then came that July morning in 1976 when everything changed. The last few sessions had been frustrating. We had flown around the traffic pattern, making attempt after attempt to perfect my landings. On each approach, all was well until the final landing flare. I tried everything, but consistency evaded me. Norm told me to keep my eyes on the far end of the runway, but I couldn’t resist the quick glance out the side window just as I was sure we were about to put a crater in the asphalt. There was nothing Norm could do but wait until I had the confidence it took to watch the runway ahead and trust the airplane to set us down gently.

On that particular morning, I arrived at the airport, prepared to go through the drill again. I felt no different, but Norm must have detected progress. After a few landings he asked me to taxi to the FBO. With me still in the pilot’s seat, he got out, walked around to my side of the plane, ducked under the wing, shook my hand and said, "Make two touch and goes and a full stop," and then pointing upward added, "May He be with you." As reality began to sink in, I thought, "Wow! I didn’t expect this! I hope he knows what he’s doing!" With my mind racing, I slowly taxied to the threshold of runway three five.

I went through the checklist and run-up carefully, hoping I wasn’t forgetting something. I finally pushed the throttle forward and the little Cessna one fifty accelerated up the long runway, quickly rising into thin air with nothing beside me but an empty seat, but I still wasn’t feeling like an eagle. I was still bound by fear and anxiety. I turned downwind and in a couple minutes was ready to turn on final approach for landing number one. Drifting earthward over the cemetery just south of the little airport, I told myself, "Think. Be ready to go around if it doesn’t feel right." This time I had to do it right. No instructor would take over.

I did it! A picture perfect landing. I could do it by myself! I was back in the air for number two. I was a bird - an eagle. I could fly. Landing number two promptly brought me back to reality. As I was bouncing down the runway, trying to bring the small plane under control, I knew I had begun celebrating too soon. Gathering all my wits back about me, I managed to make number three a landing that didn’t embarrass me like the previous fiasco. I had begun a journey, a journey during which I would often be reminded of the harsh realities that can be brought about by inattention, carelessness or boldness. 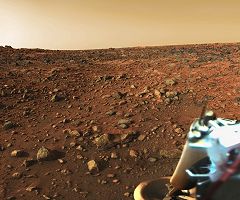 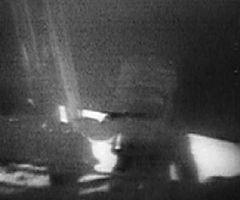 Congratulations were given, my logbook was signed, and I headed for my car. Halfway across the parking lot I realized I had not made it back to earth. I had to be walking at least six inches above the ground. I had finally learned the answer to Bill Cosby’s immortal question, "Why is there air?" Of course, it’s because we need a place to fly! I arrived at work, still walking on air, to find a group of coworkers gathered around a television, watching the first pictures arriving from Viking One on the rocky red surface of Mars. The announcer reminded us that this July 20th, 1976 was also the seventh anniversary of Neil Armstrong’s first steps on the moon. How appropriate!