Any family history would be incomplete if mention were not made of their religious and political background. For this information we go back to the 16th century and the movement called "The Reformation." This is in Martin Luther's time and is the beginning of Protestantism.

Later, Menno Simons carne up with another theory of what he believed was the right way of God's Word. This led to the Mennonite Denomination. Later, in Russia, the believers organized a church and called themselves "Mennonite Brethren" which our forefathers joined. The Catholic Church existed before The Reformation.

As early as 1523 a group of dissenters appeared in Zurich, Switzerland calling themselves Anabaptists. They rejected infant baptism, held the church to be only of Christians that had accepted Jesus Christ as their personal Savior, and were baptized on confession of their faith. They advocated separation of Church and State and refused to hold public offices or bear arms. They were conscientious objectors who rejected war and the killing of others.

Because of such opposing views of thought as stated in the above, the people were persecuted severely. Despite the treatment they received, the movement spread rapidly and crossed the border from Switzerland into Southern Germany, Central Germany, and down the Rhine toward Northwestern Germany. It extended to the Netherlands and Austria. Many people fled from their homes and country. Some went to England, others to the New World, America. Many traveled eastward and found a haven in East Prussia. These were some of our ancestors.

In the 18th century the Prussia region came under the rule of the Hohenzollern King. The people were treated with much toleration at first, but later, because of their refusal to perform military services, they were forced to pay heavy tribute to support military training schools and other severe restraints. The people went into decline. They became impoverished, suffered morally and spiritually from lack of proper growth. They became restless, and were ready for another migration.

Russia, through her wars with Turkey, had acquired a vast area of land to the south. It included the island of Crimea, and a large area to the east. All this land was some of the most fertile land in Russia. Russia needed people to settle on this land and farm it.

(The following is how our forefathers came to America and settled in Kansas.)

Russia was anxious to keep this territory. Empress Catherine II invited settlers to this region. The Germans of Prussia, our ancestors, were an especially desirable people because of their farming industry, thrift, and knowledge of agriculture. In 1788 she sent her personal agent to Danzig to interview the people. She was much pleased with the report. They were promised about 180 acres of land free to each family head, transportation aid, help in building their homes, and most of all, she assured them total exemption from all military obligations and religious freedom.

Hundreds of families left Prussia to go to Russia in all manners of travel. Some carried their packs on their backs, others pushed Wheelbarrows and wagons drawn by oxen and horses. They went in great numbers and kept crowding more inward until they came to Crimea in Russia. This was a very rich and fertile area with a mild climate.

Taking part in this mad rush to the promised land, Russia, were our ancestors.

The Reimckes and Seibels came from Germany to Russia and stayed there until the Russian government began instituting universal military services and the young men of German parentage were no longer exempt. Their thought turned to migration again. Many left Russia from 1874-1880 to go to America. They chose Kansas for their home because it was so much like their home in Russia.

HISTORY AND DESCENDANTS OF OUR PARENTS

Rev. Christian Hagan Seibel (whose parents were George and Margaretha Hagan Seibel) departed to America via SS Wieland, Hamburg and arrived in New York on June 28, 1876.

They had a family of six children: Christian, Lizzie-- Mrs. Jake Gross, Minnie--Mrs. Wm Litke, John, Carolina-- Mrs. Geo Riemcke, and David. In 1876 they came to America from Bellegwich, Sarator (Old Colony Russia on the Malotschna River) with a number of other families. They settled in the Ebenfeld community, southeast of Hillsboro, Kansas and were farmers. 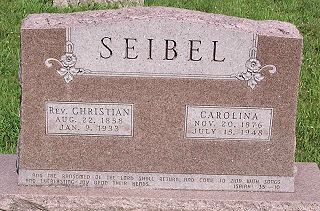 Rev. Christian Seibel was born Aug. 22, 1858 in Russia and died Jan. 9, 1933 at the age of 75 years in Hillsboro, Kansas. He came to Kansas from Russia with his parents in 1876 at the age of 18. In 1878 he accepted Jesus Christ as his personal Savior, was baptized, and became a member of the Ebenfeld Mennonite Brethren Church of Hillsboro, Kansas. Here he was elected and ordained to preach the gospel in 1908.

I do not know too much of the Schale side of the family. I know of Uncle Jake and Flora Seibel Schale.

I asked Rev. Orlando Harms, a grandson of Justina Schale, to help find information on the Schales and he did.

Justina Schale Seibel, was the daughter of Johann and Anna Wollman Schol. They came to America in 1880 from Colony Rosenfeld in Russia. Most of her family had been baptized in Russia and in America and were members of the Ebenfeld M.B. Church. Justina Schol was born on June 15, 1858 in Colony Rosenfeld, Russia and died Dec. 13, 1892, Ebenfeld, Kansas. She was baptized May 12, 1876 by Edward Loppke in Russia. She married Christian Seibel at Ebenfeld Kansas on Dec. 19, 1880. They lived on a farm in the Ebenfeld community.

To this union eight children were born. Three sons died in infancy leaving five daughters. She is buried in the Ebenfeld cemetery at Hillsboro, Kansas.

Her direct living descendants numbered 89 in July of 1985.

Carolina Delk Seibel's grandparents were George Konrad Reimcke and Johanna Justina Katharine Baumback Reimcke. George was born in Russia on June 7, 1822 and died on Sept. 7, 1909 at the age of 87. Johanna was born in Russia on Dec. 9, 1826 and died on Aug. 13, 1912 at the age of 86. Both died at Olivet, South Dakota. They came to America in 1874 to Hillsboro, Kansas in 1877 they then moved to Olivet, South Dakota. An interesting note is that in 1956 some kin fenced their graves, put up a maker for them and now we can visit this grave site and know that Mother Seibel's grandparents are buried there.

Carolina Delk Seibel's parents were Henry and Katharine Reimcke Delk. They moved to Parkston South Dakota in 1877. At this time she was a little baby and she lived there until her marriage to Rev. Christian Seibel.

Her father, Henry, was born on April 24, 1846 in Russia and died on Oct, 31, 1931 in Harvey North Dakota and was buried in the Harvey Country Cemetery. He had moved to Harvey from Hillsboro, Kansas about 1928.

Her mother, Katharina Reimcke Delk was born in 1848 in Russia. She died on Oct. 10, 1877 in Parkston North Dakota where she was also buried. They had three daughters: Katharina--Mrs. J,C. Seibel, Charlottie-- Mrs. Leonard Baumback, and Carolina--Mrs. Christian Seibel.

Her father married again giving her six half brothers; Henry, Geo, Jake, Charley, John, and David Delk, and three half sisters: Sarah Buchmiller, Lois Seibel, and Martha Janzen. Her father moved back to Peabody, Kansas after his second marriage and were farmers.

Mother Carolina Delk Seibel was born 11-20, 1876 about 1 1/4 miles south of the Ebenfeld Church (sometimes called "near Peabody, Kansas.") She died on July, 15 1948 in the Salem Hospital in Hillsboro at the age of 72 years. Father and Mother are buried in the Ebenfeld M.B. Cemetery southeast of Hillsboro, Kansas.

In 1891, by the confession of faith in Jesus Christ as her personal Savior, she was baptized and joined the M.B. Church at Parkston, North Dakota and later transferred to Ebenfeld M.B. Church.

On Nov.6, 1895 she married Rev. Christian Seibel at Parkston North Dakota and moved with him to Hillsboro, (Ebenfeld) Kansas, on a farm.

Our parents bought the farm 1/2 mile west of the Ebenfeld Church from his father Geo Seibel. They lived on this farm all their married life. Later their youngest son Christian H. (Bud) bought the farm from the estate and lived there until 1984 when a cancer condition called home. This farm was a Seibel farm for 109 years. In 1984 it was sold to Robert and Rita Loewen in July.