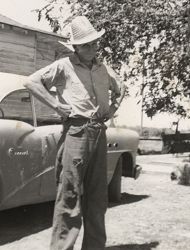 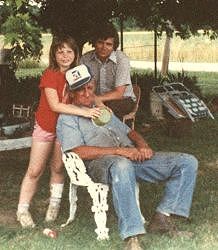 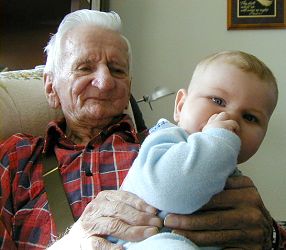 On October 9, 2004 Clarence Seibel went to see his Savior face to face. Along with his Savior, he was met at heaven’s door by his parents, his brother Ernest Seibel, his brother-in-law Sam Quintana, and his granddaughter Karissa Jost.

He came to this world on September 12, 1923, the third child born to Jacob and Anna (Wall) Seibel on a farm west of Aulne, Kansas. 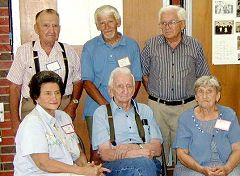 He will be missed by his older brother Elmer and his wife Dorothy (Pankratz) of Newton, Kansas and by his older sister Lucena Thiessen and her husband Alfred of Fredonia, Kansas.

Clarence grew in wisdom and stature and developed the honesty and caring heart that would make him a blessing to everyone he would touch throughout his life. The family moved from time to time in the Marion county area and continued to grow. A brother, Homer, was added to the family and survives with his wife Goldie (Wolfe) in Arkansas City, Kansas. Next came Ernest who preceded Clarence in death at Chanute, Kansas. A fourth brother, Wallace, was born and survives with his wife Dolly (Warkentin) in Wichita, Kansas. The youngest sister Frances (Quintana) survives in Emporia, Kansas and was preceded by her husband Sam. To Clarence’s brothers and sisters were born 18 nieces and nephews who often enjoyed gathering at his farm and whom all survive.

An accident on the Gillet farm south of Peabody would cause Clarence an unseen injury that would bring future challenges that only God could bring him through. 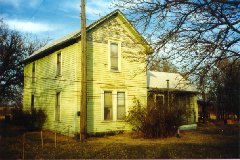 In 1938 the family moved to Fredonia, Kansas, the area which Clarence would call home for most of his life. It was there as a young teenage boy, that he accepted Jesus as his Savior and became a member of First Baptist Church. He continued to be involved in the First Mennonite Church as usher, Sunday School superintendent, deacon and trustee. He and his wife Mary would often provide special music - with him playing the violin and her the piano or organ. "O What a Savior" was a favorite song that he loved to play or sing. It was clear that the words had much meaning to him.

It was on December 15, 1949 that Clarence was married to Mary Koslowsky of Marion County, for the remaining 54 years of his life. They farmed north of Fredonia for 47 of those years. 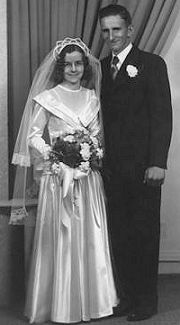 He was a good farmer blessed by God in many ways. He had a knack for fixing things, often helping out a neighbor at the expense of his own business. He truly enjoyed life.

A son and daughter were born to the couple. Gene and his wife Sue survive in Edwardsville, Illinois. Eleanor Jost and her husband Lowell survive in Hillsboro, Kansas. Clarence was always interested and involved in the lives and welfare of his children.

Gene has lived in distant parts of the country and flies his own airplane. Clarence enjoyed the occasional airplane ride, but was happiest to hear that Gene had safely landed somewhere or another. Gene’s only child and Clarence’s oldest granddaughter Rebecca often stayed with her Grandpa on the farm during summers and brought him much joy. She and her husband Matt Sipe now live at Springfield, Missouri and she works in radiology - inspired by seeing her Grandpa receiving radiation treatments when she was a teenager.

Eleanor and Lowell have always lived in Hillsboro, Kansas, where she has had the opportunity to care for Clarence in his retirement years. Her and Lowell’s first daughter Karissa went ahead to heaven at a week old to welcome her Grandpa there. Daughters Amber and Karis remain in the Hillsboro area, having had the opportunity to visit him often and reminisce about weiner roasts, riding the 3-wheeler, and seeing baby calves on their visits to the farm. Amber’s son Logan and daughter Lexi brought him smiles and joy in his last days.

Clarence’s years on the farm became more challenging as the years went on. His health deteriorated, robbing him of the sleep and peace that he needed to farm, but with God’s strength he fought a good fight. Still, he knew when it was time to retire to Hillsboro and enjoy a few years near old friends and family. It was a precious time for many of us. Even in his last days when we weren’t sure how much knowing there was behind those blue eyes, he would smile and tell people, "I love you.", and would often talk of heaven. We look forward to seeing him there.