Over the years I have pretty much tried to keep my electronics vocation separate from my leisure activities. Forty or more hours per week thinking about radio and TV is enough. However, the last few years and the takeover of television by digital technology has created a yearning in me for the old days and old technology that's fast fading into obscurity. I decided that I would like to begin an old radio restoration project. Sue and I taking off to follow the World's Longest Yardsale provided me with the perfect opportunity to pursue my first candidate. 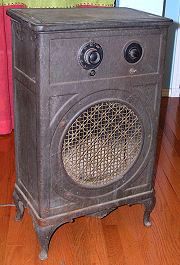 On the third day of the sale, I walked past what appeared to be some type of heater or stove. Didn't think much about it, but as I turned and looked back for Sue, I noticed knobs that didn't seem to fit a stove. Closer inspection revealed something I had never seen before - an unusual metal cased Atwater Kent radio.

The seller lifted the top to reveal circuitry that was in great shape. Even the labels were still completely legible. It was a Model 52 and I deduced from the three large tuning capacitors that the radio was of the pre-heterodyne direct TRF type circuit in which three stages of RF amplification were individually tuned, indicating it was quite old. The seller remembered a friend or relative listening to the radio, but it's not clear how long ago that was. We did our negotiating, and I went to get the truck.

The internet brought a wealth of information, including schematics, forums, possible sources of parts, and the fact that the Model 52 was manufactured in 1928 - the decade of broadcasting's birth and 22 years before mine! My mind was soon filled with visions of those days:

Even with my 35 years of experience in the broadcast field, I found myself somewhat intimidated at the prospect of turning on this puppy. Obviously, the years have taken their toll on circuit components. I didn't want to be hunting down tripped breakers, and even more importantly, I didn't want to blow up still working, but nearly irreplaceable parts. I went to the beginner's section on Phil's Old Radio site and started out with his suggested Dim Bulb Test.

At first I got no illumination at all, so there was obviously an open circuit. The schematic that I had downloaded indicated it had to be either the power switch, power transformer, or the AC line regulator ballast.

Further disassembly allowed me to determine that the problem was in the ballast - a very 1920's wire wound resistor. I further determined that the fine wire was broken at the one of the points where it passed through the insulating material. Radio Shack probably wouldn't have one, so I figured I could unwind one turn of wire and reattach it to the terminal and it should work just fine. With enough light and magnification I was able to do just that. I began to think this was as difficult as working on a modern compact circuit board. With a little help from one of Sue's sewing needles, I was able to rethread the wire where it was needed and reinsert the tiny wooden dowel to hold it in place. 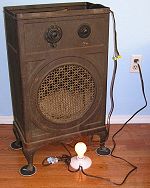 Once again I applied the Dim Bulb Test and got different results. With a 100 watt bulb in series, high voltages came up while the bulb stayed relatively dim. Replacing the light bulb with a screw-in 6 1/4 amp fuse applied full AC voltage to the radio. The fuse held and all seven tube filaments were now visibly glowing. I began checking voltages. Plate voltages were somewhat low - most notably on the detector tube which was reading 7.5 volts instead of 45. A check with an ohmmeter showed the detector plate resistor as 325 kohms instead of the required 65 kohms.

That resistor appeared to be buried in the power unit. I had no idea if it was accessible since this was my first venture into an old radio. I carefully removed the cable and began lifting the circuit board from the top of the PU. It seemed stuck, but with a little persuasion the tar let go.

Underneath in clips were the detector and 1st audio plate resisitors. Both were far out of tolerance. While I was at it, I checked the grid leak resistor on the radio chasis and found it to be open.

These never before seen by me type of resistors are apparently of a glass tublar construction containing carbon or some other substance. So far my search has not turned up a replacement. For now, I am able to create reasonable facsimiles using a modern resistor and short lengths of #4 electrical wire in order to continue my troubleshooting.

We are coming closer to having a working radio - or not. The new resistors brought the tube voltages to reasonable values, but they still drop slowly as the radio warms up. Although there are no direct shorts, there are obviously still issues with leaky power supply capacitors. My research tells me that I am going to have to dig the tar out of the power unit to get to the offending parts. It also tells me that the tar must be heated to 275° F to soften. Yuk! 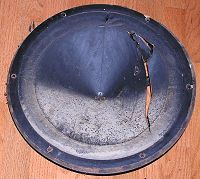 There is no sound of any type out of the speaker and I know it needs attention. The cone is torn and caked with dirt. An ohmmeter check across the speaker leads shows an open circuit.

Well, that's the progress so far. Tune in again next week for another exciting episode. ;)