"Science, freedom, beauty, adventure: What more could you ask of life? Aviation combined all the elements I loved.

There was science in each curve of an airfoil, in each angle between strut and wire, in the gap of a spark plug or the color of the exhaust pipe.

There was freedom in the unlimited horizon, on the open fields where one landed.

A pilot was surrounded by beauty of earth and sky. He brushed treetops with the birds, leapt valleys and rivers, explored the cloud canyons he had gazed at as a child.

Adventure lay in each puff of the wind. 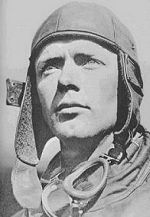 I began to feel that I lived on a higher plane than the skeptics of the ground; one that was richer because of its very association with the element of danger they dreaded, because it was free of the earth to which they were bound. In flying, I tasted the wine of the gods of which they could know nothing. Who valued life more highly, the aviators who spent it on the art they loved, or these misers who doled it out like pennies through their ant like days? I decided that if I could fly for ten years before I was killed in a crash, it would be a worthwhile trade for an ordinary lifetime."