We thought last weekend would be a good time to visit family in Kansas. Thursday and Friday brought wind and storms and Saturday looked iffy. We figured we could drive - if we had to. There was no need to make a decision until Saturday - the plane was waiting in the hangar for no one but us. 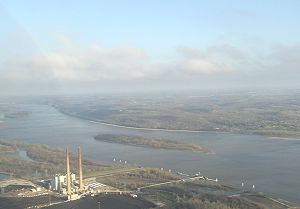 Saturday morning was breezy and overcast as we scooted low across the Mississippi River and under St Louie's Class B airspace, but soon we were in bright sunshine and climbed up to grab a tailwind. We passed by a nuclear power plant spewing its steam into the brisk early morning air, got a bird's eye view of an air force base from which B2s once flew to battlefields around the world, and stopped for fuel at a friendly airport we'd never visited before. By lunchtime we were on the ground in the middle of the Kansas Plains for a fabulous, relaxing weekend. 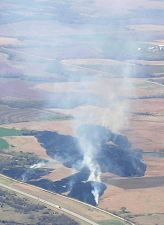 Next afternoon we waited until 6ish and climbed into a clear blue sky, soon to be on top of a brown hazy layer of smoke from prairie fires across the Flint Hills. Another tailwind, from the west this time, swept us toward the approaching darkness. We sped along smoothly, watching beads of lights sparkle along the highways as the sun set over towns and villages. Our fuel stop was in darkness outside a small Missouri town. We stayed high over the power lines I knew existed at the approach end of runway one eight and swooped down like a dive bomber. We used the self service pump at the silent, empty little airport and were off into the moon kissed sky again. 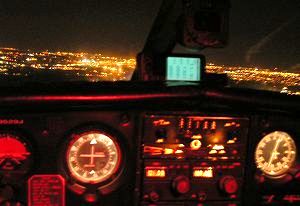 We stayed low for the rest of the trip, speeding at Mach .16 over a carpet of light as St Louis stretched to the horizon before us. The familiar but dark Mississippi wound its way through the lights as we approached our home airport and turned final some eight minutes before the tower closed down for the night. It was a perfect ending for the greatest trip since ..... well, since three weeks ago when we flew to Kill Devil Hills to see where the Wright Brothers first flew. ;)

Why fly? Because flights like these are just priceless.