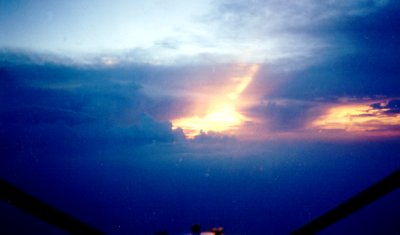 In every state we have lived in or visited, we have heard natives make the same statement, "If you don’t like the weather, just wait a few minutes and it’ll change". No where is this declaration more true than in Missouri in springtime, and last Saturday was a prime example.

My wife and I had made the 200 mile flight in our Piper TriPacer to visit family in southern Missouri. The trip down was uneventful, under a clear blue sky accented by only a few wisps of cloud. The day passed quickly and quietly as we attended a reception for a newlywed nephew and visited with numerous family members. I gave little thought to the return flight. All indications were that conditions would remain clear to partly cloudy throughout the day. Weather reports at 6pm confirmed ceiling and visibility were expected to remain very good, although there was a "chance" of thunderstorms and "temporary" conditions of low visibility and wind. Radar displays showed areas of precipitation beginning to appear in Kansas, a hundred miles or more west of our course, but our route of flight looked great. By 7pm we were at the airport preparing to buzz off into the evening sky for the 1 hour and 40 minute flight home.

We taxied to the downtown airport’s only runway and did a quick run-up. After back-taxiing to the end of the 3835 foot strip, we turned to the west and accelerated into the setting sun. A gusty breeze puffed across the runway, keeping me alert, but without making our takeoff difficult. A quick glance to the left revealed a Saturday baseball game going on along side the airport. It was a perfect evening for baseball .... or flying.

Our departure took us over residential and industrial areas of the city. Climbing to gain altitude above the neighborhood homes and the towers, I at last relaxed and began a turn to the northwest. The first thing I noticed as I looked into the northern sky, was the darkness of the atmosphere. I had often experienced this contrast before when looking from a sunlit area into a cloud canopied area. Just an hour ago I had been sitting in our daughter’s apartment staring at a computer radar display depicting a clear Missouri sky. I checked my Global Positioning System. Its emergency search feature was displaying numerous small airports in every direction. We had many options.

I confidently but curiously flipped my radio to the flight watch frequency. Soon the headphones came alive. Another aircraft had taken off just after we did and was asking for Kansas weather. I pictured the weather beginning to build "out west" in Kansas. Flight watch was answering through a distant transmitter I could not hear their response. I expected a flight to Kansas would involve some weather, but was totally unprepared for what I heard. The Kansas bound pilot came back on the air to announce he was returning to his departure point. By now my sky was growing darker and darker and my level of concern was growing as well. Once again I checked my GPS for options. We were in no danger, but I was pondering whether to return and spend the night with the kids, or take a chance on getting home with the possibility of having to spend the night in some isolated small town.

Though sunset had not occurred, the surface of the earth was becoming quite dark, and the lights of central Missouri’s towns and villages were blinking on. Our northwesterly course extended directly into the darkest region. Looking to the right of our course, directly to the north, the lights of a larger town had an inviting glow and the dim outlines of its surrounding lakes were beginning to faintly appear. Farther north, under the ominously growing overcast I could make out an orange luminescence. I recognized this as sunlit earth, or the light at the end of the tunnel. There was no choice but to deviate 30 degrees to the right. It would be a night in central Missouri or a dash all the way home. I no longer considered returning to our departure point.

The trip had been surprisingly smooth so far. I thought back on a flight where I came too close to a thunderstorm and caught a bone-jarring jolt of turbulence I will never forget. The sky was beginning to light up with an occasional flash of lightening. I was enjoying the show, but at the same time feeling edgy about the situation. "If the turbulence begins, we land immediately," I thought as I again checked our distance to the nearest airport. We were now 5.8 miles from an airport where I had once before waited out a storm. It was decision time.

The sunlight on the horizon was as bright as ever. But would it remain until we arrived? Sunset was approaching. Then, as I looked to the left it appeared the main core of the storm was directly beside us. Suddenly I felt we were in a race and in a position to take the lead. With this new surge of confidence, I decided against landing at the airport we were now passing. There were more options closer to home. As we cruised ever northward, I watched the safety of a known airport disappear on the right and the storm become darker on the left. It was soon apparent the storm was moving in behind us, making a retreat in that direction impossible.

Soon I would have to correct our course back to the northwest. If I turned too soon, we could tangle with the turbulence surrounding the storm, but If I waited too long, the weather coming from Kansas could beat us home. I cautiously began changing course, a few degrees at first to see if the ride remained smooth. As more of the storm passed behind us I finally turned to a course that the GPS indicated would take us directly home.

Just as I was beginning to feel optimistic about completing the trip home, the radio began to chatter again. It seems thunderstorm cells were beginning to form in south Kansas City. Our destination was 50 miles north of Kansas City, but the path of those cells was directly across our course. Suddenly there were more runners in the race. To our left the angry storms were growing. The dark gray clouds now had columns of driving rain beneath them, punctuated by frequent bolts of sizzling, yellow lightening. Kansas City came into view as I had never seen it before, a familiar landscape extending from the jaws of an angry, unfamiliar beast. The amber street lights of the suburbs complimented the blue-gray of the advancing storm. To our right, there were miles of clear Missouri country to which we could escape if the monster decided to reach out for us, but I was enjoying the show from our box seat in the sky and had no intention of retreating now.

I was no longer concerned about getting home. Even if we spent the night in some out-of-the-way place, the trip was a success. I had once again witnessed the awesome power of a thunderstorm from a perfect vantage point, and so far done it without encountering so much as a hint of turbulence. The radio was bustling with nervous pilots, each seeking information on his own personal race against the storm to his respective airport.

We began a slow decent as I savored the images to which I had just been treated. Soon we were skimming across our hometown into a left base for good old runway 17. Turning final we began to feel the effects of the approaching thunderstorm. Not ten miles ahead, the lightening strobed rain was creeping across the dark Kansas countryside to meet us. We loaded our few treasures into our waiting car, pushed the TriPacer into the hangar, and headed for home just as big raindrops began to splatter on the windshield. Arriving home, we turned on the TV so see radar images of a line of severe thunderstorms thrust into the body of Missouri like a sword. We had leapt across its trajectory with only minutes to spare. This is truly what makes flying one of the most memorable activities on earth.

Dash back to Gene's home page... - Convection Connection Read this story and dozens more in the book Confessions of a Pilot.