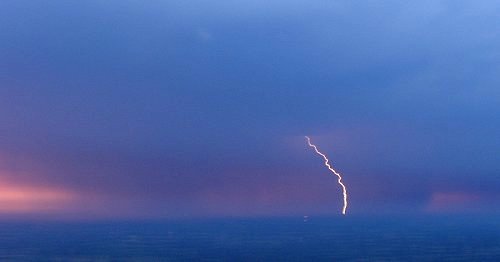 It was a shock. Becca and I came out of the restaurant and there it was, a massive gray cloud overshadowing Springfield, Missouri. I had sat pigging out on pork and having conversation with my daughter in the James River Grill, all the while confident that I would soon be flying off into clear, friendly skies.

That morning I had awakened in Memphis to the tunes of an Afro-American radio station. That’s where the clock radio was set when I checked it and I thought it would be cool to wake to the sounds of this different place and culture. Outside there were puffy white clouds drifting low in a blue sky. I checked e-mail and then the DUAT weather, not really knowing if this would be the day I would return home. All forecasts were optimistic, the worst news being the possibility of "temporary" thunderstorms and light rain.

By 2 pm I was on my way to the airport. I was going to be able to stop on the way home and spend a couple hours with Becca. My TriPacer and I climbed up among the cottony clouds to my chosen VFR altitude. Some were taller than our path and we made some zigs and zags, but soon our vaporous companions became smaller and more scattered. As we approached Springfield, we were alone in the sky. Looking north, I could see nearly to Kansas City and our home on the range - "Home on the range .... where seldom is heard a discouraging word and the skies are not cloudy all day".

That was two hours ago. Now an ominous gray cloud had taken away the afternoon sun. The situation looked better toward the east and the Downtown Airport where we had landed, but I was afraid trouble was brewing.

Taking off from runway one-zero, I turned left and saw my groundspeed leap to 145 mph. At least it would be a short flight! Ahead I could see overcast skies, but ceilings were well above my planned altitude and I could see brightened horizons. Not bad, I thought.

Soon fifteen minutes of smooth flight had passed. Then out of the invisible gray sky, the shaking began. I felt smaller and smaller as we began being tossed about like a leaf. "Doesn’t a thunderstorm have rain and lightning?", I thought. I see neither, but this is beginning to feel like a thunderstorm. I kept busy controlling the aircraft. I felt it might be smoother lower. I reduced power and lowered the nose. Still we were not descending. An updraft had us in it's clutches. Lowering the nose more we finally were unwinding the altimeter. But now airspeed was in the yellow arc! Soon I had power all the way back to idle and airspeed had returned to the neighborhood of maneuvering speed. What a ride. There were smooth periods and then the invisible forces would begin their work again. The turbulence was at times severe, but that was not much worse than the moments of smoothness when anticipating the next jolt. Waiting for the other shoe to drop.

I talked to God, reminding Him where I was. I tightened my seat belt some more. The barbecued pork I had enjoyed an hour ago was now a knot in my stomach. I remembered how a Boeing 747’s wings flapped in turbulence. I looked at my wings. They remained stiff as a board. I don’t know all the engineering differences between Boeing wings and TriPacer wings, but I took that as a good thing.

I was over sparsely populated west central Missouri. I was subconsciously drawn to lighter landscape and now considerably west of my planned course. My GPS indicated that the next major town ahead was Butler. I considered landing. I got close and even turned towards the airport on what could be a long final, but the jumps and jerks continued. This was uncomfortable, but near the ground it would be much more scary. The atmosphere appeared lighter and tamer to the northwest. I turned north and the tailwind would take me to another airport at Harrisonville in a very few minutes. Four lane highway 71 below me was comforting. Cars were speeding in two directions, those in Kansas City wanting to be in Joplin and those in Joplin wanting to be in Kansas City. On the ground below me, life was normal.

I was now seeing Kansas City’s lights in the distance. I began scanning the radio. First the ATIS at Richards Gebaur. After listening to the information several times and absorbing it, I began to ask, "What’s happening NOW?" This was recorded many action-filled minutes ago. Looking again at my sectional, I noted an ASOS at New Century. I tuned it in and it was coming in clear. Minute by minute, blow by blow, it gave me the latest conditions. The wind sounded manageable. Maybe this automated weather stuff was OK. I took a heading for New Century and lo and behold it was in a bright section of the horizon. At 22 miles I called in and announced my position. They mentioned there were thunderstorms east of their position. No kidding! To my right there was now driving rain and forked bolts of lightening.

I could now see light of the setting sun reflecting off New Century’s shiny, wet runways, soaked moments ago by the monster to my right. As I turned final the runway lights outlined a wet but inviting target. I parked my faithful TriPacer and went in to look at the radar. The girl behind the desk asked if I had been out in this weather. I said, "Yes". She asked, "Why?" When had one word ever represented so many questions? Why was I still shaking?

Watching the radar display was frustrating. It updated every 15 minutes with 30 minute old information. By the time a cell was past another one could be in it’s place. Finally the reds and yellows had moved on and it was time to zip home to St. Joseph, this time with Kansas City approach holding my hand all the way. After a deviation to the west and a few bumps and bounces we sneaked into good old STJ from the west. The decent one-wheel night landing in a 16 knot direct crosswind was a rewarding finish to a very interesting flight.

Read this story and dozens more in the book Confessions of a Pilot.
Gene and Sue's Home - More Stories - Convection Connection