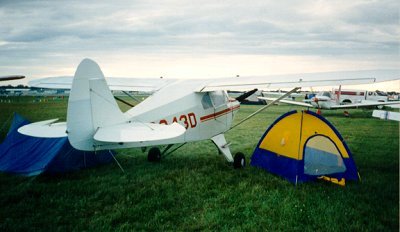 Getting there is most of the fun!

This year I was determined to fly to Oshkosh. I had done it once before, eleven long years ago with my wife and 8-year old daughter. This year the idea gave me the same familiar anticipation that I remembered from that distant time, but this year was bound to hold fresh experiences with new found pilot friends.

I awoke early that dreary Saturday morning to find solid cloud cover, but it was still T minus one and a half hours. A lot could change. The forecasts didn’t correspond to the early morning drizzle outside my window. I would proceed on faith, "..the substance of things hoped for, the evidence of things not seen." I proceeded to file a flight plan and finish packing. Soon my sleeping wife was awake and ready to cart me off to the airport before hitting the garage sales. As far as Oshkosh was concerned, she'd, been there and done that.

On the way to the airport, I realized I had not called the FBO the night before to have the plane pulled out of the hangar and hoped it wasn’t buried too deeply. It was. Fortunately the FBO operator had come out early, and I interrupted him from his peaceful office to drag the TriPacer out from behind five other planes. I kept an eye on the distant river bluffs. They were becoming more and more distinct through the wet biosphere. Finally at 0615 hours, we were ready to soar into the grayness.

After climbing to a decent altitude, I found myself surrounded by a reasonable circle of visibility that followed my every move. We passed over Topeka just as their tower opened. A lone aircraft in the pattern was given a special VFR clearance to continue his circuit work. Up ahead the oranges and blues of sun and sky were beginning to overpower the morning dreariness. My small circle of visibility began to burst outward across the green Kansas countryside. Oshkosh, here we come.

I made my first stop at Emporia. The fuel truck was just pulling away when Cody turned final in the company Queen Air, back from his cargo route. We stuffed his sleeping bag into the mostly filled baggage compartment and took off for Manhattan. The remaining morning clouds were now disintegrating before our eyes. Turning off runway two one, we saw that JD’s Queen Air had already arrived and he was ready to go. Another sleeping bag was shoved into the already stuffed baggage compartment. The TriPacer was now beginning to look more like its tail dragging ancestor, the Pacer. We taxied out past a coyote taking an early morning stroll alongside the runway. We were on our way.

It was an interesting experience to have three excited pilots in one cockpit. Three different styles of flight emerged. Visual traffic separation or flight following? GPS or landmarks? We had it all as we skimmed along the top of the summer haze. Our groundspeed was fairly good as we crossed the Missouri River, but crossing the flatlands of Missouri and Iowa brought less favorable winds. A few cottony clouds drifting across Iowa chose our altitude as their playground. We dove deeper into the haze to escape them.

Nearly at our fuel stop, Cody asked if I would like him to fly awhile. Silly me, why hadn’t I taken advantage of this planeload of talent long ago so I could sit back and immerse myself in the scenery. Cody had told me of his experiences in his dad’s TriPacer, and as soon as he grasped the yoke, I could see he was at home. As we approached Cedar Rapids, his handling of the aircraft kept me at ease. I couldn’t remember that I had ever let anyone else land my jealously guarded pride and joy, but I enjoyed doing it this time.

After refueling and stretching our legs we were ready to fold ourselves back into the tiny cockpit. We guessed that if we stayed low and the wind didn’t get much worse, we should arrive at Ripon thirty minutes before the airport closed for the day’s airshow. We scooted across the mighty Mississippi and up across the rolling, tree covered hills of Wisconsin. It was a great day to be outdoors. Hundreds of sportsmen were out on the rivers in their kayaks and canoes. JD was now in the copilot’s seat and constantly checking his watch and the radio. It was going to be a race down to the wire. 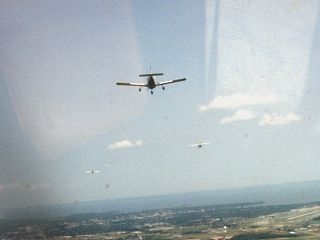 Soon our headphones were filled with the chatter of Oshkosh approach. Rush Lake and Ripon came into view. We crossed Ripon at 2:08 and airport closure was scheduled for 2:30. As we headed up the railroad, I looked at JD. He smiled and gave a thumbs up. We had made it. The voice from Fisk asked if there were any more planes inside Ripon, and JD responded in the affirmative. Only 11 miles to Fisk and 6 more to Oshkosh and we’d be in pilot heaven. But it was not to be so simple. Minutes later at 2:13 we heard the heartbreaking news, "The airport is now closing. TriPacer, we’re going to have to break you off." JD and I looked at each other in disbelief. So close, yet so far.

Disappointed and tired after nearly seven hours in that not-so-comfortable seat, I started a right turn in the direction of Fond Du Lac. I was now zero for two. Last time we had diverted to Fond Du Lac as well, because of saturation in the parking areas at Oshkosh. I was happy that JD was operating the radio this time. I remembered what a zoo Fond Du Lac had been last time, with hundreds of aircraft trying to land while racers circled the airport at five hundred feet. Now, I just wanted to get on the ground. I sat there half dazed, still unable to believe what had just happened. Within a half hour we were in a bouncing school bus on the highway to Oshkosh. Soon we were pulling through the gates and the pangs of disappointment were suddenly swept away by an air of excitement. The airshow was in full swing and the sky was filling with scribbles of smoke. We had arrived.

After filling our empty stomachs, we spent four hours filling our heads with all the sights, sounds, and sensations we could absorb. The trip was now a success. We sat happily on the ground waiting for the next bus back to Fond Du Lac to fetch our flying machine. The day would conclude with the crowning achievement - landing at Oshkosh. The evening flight from Fond Du Lac to Ripon and up to Oshkosh was lovely. We were following a yellow homebuilt that seemed to have difficulty maintaining the 90 knot, 1800 foot MSL approach profile, but we managed to maintain some appearance of order in our approach. This time we were given a tight pattern into runway two seven, as opposed to the long final over Lake Winnebago eleven years ago.

We taxied off the runway and were directed to the patch of grass that would be our home for the next 36 hours. All around us were Cessna homes, Piper homes, and Beech homes. The tents went up quickly and we grabbed a bus to restaurant row. There was a wait at the restaurant, but we didn’t mind. There was plenty to talk about, and when all was finally said and done, we could eavesdrop on snippets of pilot talk going on all around us. Full and satisfied, we headed back to the aircraft parking area. Only then did we realize that we did not know the row number in which we had parked. As we searched for our home among rows and rows and rows of airplanes in the dark, we were finally overcome with uncontrollable laughter. What a perfect ending to this incredibly weird day.

Stampede back to Gene's home page or airplane page.