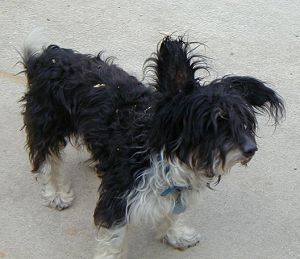 We called him Mikey. I first saw him when I went into the garage and heard a growl. He was lying on an old orange chair. I stepped closer and he snapped his little teeth at me. I let him be. The next morning he was still there. Walking towards him would bring the same growl and snap. I set out a water dish. Two more days and I could walk up to him, yet extending my hand brought a vicious response. We put out cat food, and it would soon disappear. Slowly but surely I found that I could carefully pet him.

Mikey had obviously been through trauma of some kind. He had patches of hair missing on his back. One ear would stand at attention, but the other refused. Nevertheless, he soon began to trust us and came into our open kitchen door, where he would sit with that special look that said, "I’m too cute to not share your food."

It quickly became apparent that despite his looks, Mikey was a canine of culture. When we said, "No," he obeyed. When he wanted out, he stepped up to the door like a gentleman and waited. When we opened the car door, he jumped in like he owned it. We began taking short rides. He looked out the window and talked in grunts and whines that had to mean something. Returning home, he’d sit there on the passenger side until I came around and let him out. I felt I was being trained as a chauffeur.

I thought, "He likes the car, wonder what he’d think of an airplane." One Saturday morning Mikey and I went to the airport. I put him on the wing and he hopped in like it was a Buick. 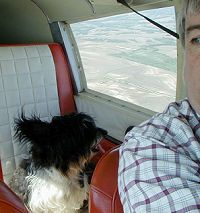 Sitting there on the front seat he was startled by the loud noise and massive instrument panel and jumped in the back. Soon he was smiling again, looking out the window with his one ear flying and one ear drooping. It was the best of times.

It was on this trip that I first saw his wanderlust. As quickly as I could pay for my fuel at the Shenandoah Airport, he was up the road towards the highway, sniffing and exploring every nook and cranny along the way. Out of breath, I caught up with him in a neighbor’s yard. We headed for home as he napped in the back seat. I knew I didn’t own him.

For months, Mikey would be waiting by the porch when we came home from work. His little tail would begin to wag as soon as he recognized us. He silently sat as we ate, knowing that his overwhelming dose of cuteness would win him some table scraps or a doggie treat. He had the act of man’s best friend down pat. Yet, I would often see him sneak off across the road, or come home across the neighbor’s back lawn. This was a dog who had a world to explore. 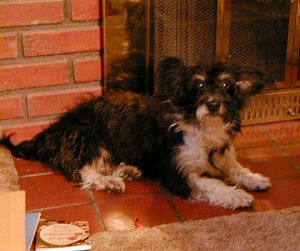 A year passed. He'd often curl up in front of the fireplace or sit at our feet. We began to take for granted that he was our little dog. Leaving on a four day vacation, we made sure a friend would come feed our companion every day. Three days he faithfully waited. On the fourth he was gone. A piece of our lives had vanished. The driveway would forever look empty without the wagging little tail and crooked ear, but somehow I felt privileged that this little vagabond of the universe had chosen to share some time with us.

I checked the pound today. He was not there. He is somewhere in this big wide world, seeing new sights and having new adventures. Does he think we abandoned him? Is he looking for us? I hope not. Did an airplane ride show him that horizons are for pushing back? Maybe!