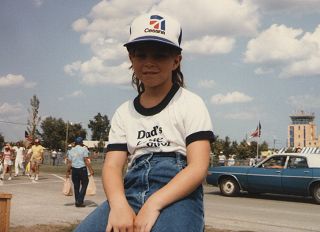 July 1985 It was in our earlier years we embarked on this adventure. It didn't seem like a big deal at the time. Only now do I realize how ambitious (or foolish?) it was. As I page through my logbook, I can hardly imagine the carefree father and 7 year old daughter that winged their way into Mexico in a 27 year old airplane made of tubing and fabric. How the years of cares have changed us. 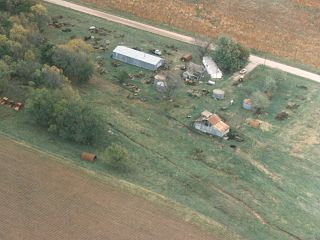 July 26 - Albuquerque, NM to Fredonia, KS
6.9 hours - 624 miles - 90 mph
Albuquerque to Fredonia was the solo part of the trip for me. It's a trip we had made many times before. Becca was spending a part of the summer with her grandparents on their farm north of Fredonia, just 4 miles from the airport. Becca's Mother, Donna, had already spent two weeks in Cuernavaca and Mexico City with eight of her senior Girl Scouts. My goal was to gather up parts of this scattered family from across North America and unite us in Mexico City.

July 27 - Fredonia, KS to McAllen, TX
7.9 hours - 800 miles - 101 mph
Early on this July morning, Becca and I set out on the adventure of a lifetime. I remember this day clearly. It is probably still the longest flight I have ever made in a single day. Southern Texas never looked so vast as it did on this summer afternoon. The heat and the turbulence were never-ending. We were so glad to stop and spend a day with the Warkentines in this south Texas border town. 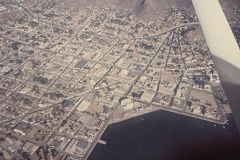 We had flown into Mexico numerous times, but not into eastern Mexico. Our first hop was just a few miles to Reynosa where we cleared Mexican customs. I was amazed at their concern that we may be bringing televisions or stereos into the country - after all, how many sets could we possibly hide in that small plane. They asked our destination and our reply of, "Mexico City" was met by the standard "no problem". As we flew on, the immense sandy beaches stretched along the Gulf of Mexico on our left. I was fascinated by the villages below, with their brown dirt streets. By afternoon I was sitting on a beach in Tampico as Becca played in the surf. I spent an hour conversing with a retired Mexican gentleman. By means of my limited Spanish and us drawing pictures in the sand, we had quite a conversation. I learned he had a nest egg of $100,000 in a bank in El Paso and a summer home in Puerto Vallarta!


On this morning, our anticipation was building as we were only three hours from Mexico City. We went to the airport but were met with the news that the weather in Mexico City was not good. We could however, go as far as Poza Rica. Upon arriving, we found ourselves on a desolate landing strip surrounded by jungle. Soon a beat up van pulled up and asked if we wanted a ride into town. Our driver skillfully negotiated the curves and dodged the oxcarts to bring us into a true Mexican village. No English here! We found a hotel for the night. After stepping over fallen plaster in the hallway, we came to our bare room. Becca summed it all up with, "Good thing mom isn't with us. She wouldn't like this!"


Again this morning the news was bad. "You don't have an instrument rating?" the airport official asked. Then you can't go to Mexico City. I never did understand if that was policy or if the weather was just too bad. What ever happened to, "no problem". I gave up trying to understand, and decided to go to Puebla instead. From there we could surly take a bus the 60 miles to Mexico City. Arriving at Puebla, I tried calling the tower, but to no avail. It turned out their radio had been broken for several months! Going into town, we found the bus station and experienced another spine tingling ride around mountain curves at high speeds. At last we joined Donna in Mexico City. I accompanied the Girl Scouts on the airline to Juarez where their parents were anxiously waiting to pick them up. Then it was back to Mexico City to continue our family vacation.


After three wonderful days in Mexico City, it was time for the bus ride back to the high and hot Puebla airport. After buying fuel out of a 55 gallon drum, we taxied for takeoff. I discovered my brakes were leaking fluid badly, but this was not the place to have them repaired. The high density altitude made for one of the most scary takeoffs I have ever made. I was thankful when we cleared the barbed wire fence at the end of the runway. Then as TV antennas loomed closer and closer I milked every ounce of lift I could from the old bird. Finally I saw a valley off to the left and slowly banked in that direction. After what seemed an eternity, I was breathing again. It was a rough start to a very beautiful flight. For the next two hours, we drifted slowly over miles of lush, green jungle foliage, punctuated by mountainside farms, with snow capped mountains beyond. Coming into Acapulco, I requested the longer runway because of my brake problem. The control tower didn't miss that information and we were met by an Aero Mexico mechanic who rounded up the necessary O-ring to make the repair for "twenty-five dollars American."


After spending a couple nights among the jet-setters, at the Tortuga Hotel, we moved on to what we hoped would be a more serene and quiet Zihuatenho. It turned out to be a disappointment. The hotel we had chosen had a pool that was full of green plant life and rooms that were lit by single bare light bulbs. We anxiously decided to leave a day earlier than planned for friendly Mazatlan. 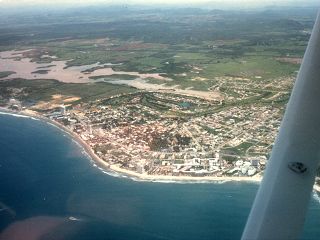 The flight to Mazatlan was lengthy, but the shore line of the blue Pacific was a beautiful sight to behold. We stopped at Manzanillo for fuel, where I was criticized in two languages for not calling the tower. I tried to explain that I had a current chart and it did not list a tower, but that didn't seem to matter. What a contrast from Puebla where repairing the tower's radio was not a priority. We finally arrived at our old familiar vacation spot at Mazatlan. We had been there before and knew well the Sands Hotel across the highway from the beach and Senor Frogs, The Shrimp Bucket and other great restaurants down the coast. Here we began to relax. 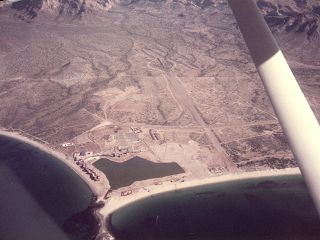 August 9 - Mazatlan, MX to Guaymas, MX
4.3 hours - 441 miles - 103 mph
Another four hour flight brought us closer home, to another familiar spot. Guaymas had been our annual destination each winter for several years. Once again we found the fabulous red-tile roofed hotel built in 1938 by the Union Pacific railroad, with its lovely sand beaches, palm trees and the buffet around the pool. Just minutes up the coast was the abandoned beach airstrip used in filming the movie Catch 22. The other direction took us to the town Mercado with it's multitude of tiny shops.


August 10 - Guaymas, MX to Albuquerque, NM
5.8 hours - 550 miles - 95 mph
At last came the final leg of our adventure. After stopping at Douglas, Arizona for customs, we slipped safely back to Albuquerque. We were surprised to be met there by another customs official. It seems our fabric covered aircraft was difficult to follow on radar and our slow airspeed gave rise to suspicions. After passengers were counted, our explanation of strong headwinds was finally accepted and we were home.


Only five weeks after our trip, on September 19th, Mexico City would be forever changed when an earthquake with a magnitude of 8.1 would flattened 400 buildings and kill 10,000 people. Back home in Albuquerque we watched rescue efforts going on in the rubble of hotels we had walked by just a few weeks before. 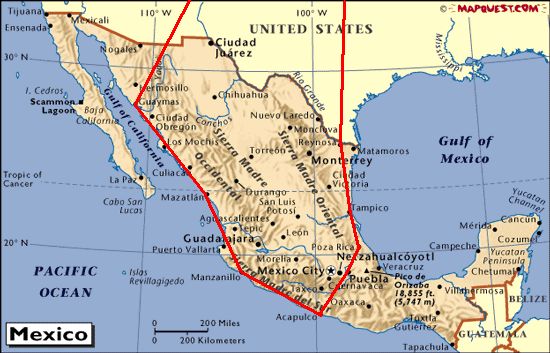 
Back to the future... - Airplane page - Places flown