Let There Be Light

It had to happen sooner or later. The single light bulb that faintly illuminates Hangar 131 gave out its last lumen. From its perch some fourteen feet above ground level, it could barely cast a shadow on the floor, but without it we were blind as bats. So, I set out on a humid summer evening to attack the problem.

Into the back of the S-10 went the tallest stepladder we had. It was hardly longer than the six foot bed, but I was optimistic that setting it up in the back of the pickup would give me the height I needed. I cautiously started up a step at a time, but found that with each step my perception of instability multiplied. Still three feet from the lifeless orb, my courage was overcome by visions of a broken body on the hard concrete floor below. It was time to reconsider.

I knew the helpful hardware store up the road would have a light bulb changer with a long pole, but I wasn't about to spend the equivalent of a half hour of aviation gas for something we might use once every couple years.

As I looked around the hangar with its three year accumulation of clutter, I came to the conclusion that there must be a MacGyver-esque solution in there somewhere, just waiting for my discovery. As I contemplated the new bulb lying there on the table, I noticed beside it the trash can containing an empty Ice Mountain water bottle. I was struck by the similarity of their dimensions and whipped out my handy dandy pocketknife to whack the bottom off the bottle. The MacGyver personality had now completely taken over my mind and body and I was on a mission.

The bulb that was the hope of future light came together with the bottle that had sacrificed its bottom and they mated perfectly, 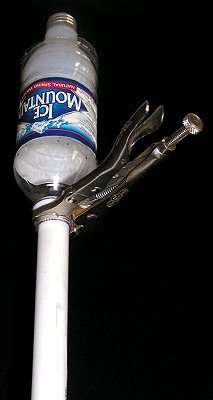 like the International Space Station and the Space Shuttle Discovery. Now all I needed was a pole. My eyes canvassed the far corners of the hangar. They fell upon a bag containing several pieces of half inch PVC pipe that had been used in a homemade sunshade. The pipe went into the opposite end of the bottle and lo and behold they fit like .... well like they were made for each other. I needed only to attach them solidly together and my light bulb changer would be complete.

The obvious answer was duct tape. I scoured the tables, drawers, and shelves for duct tape, without success. I couldn't believe it! What self respecting engineer/pilot/hangar master would find himself without duct tape? What would MacGyver do? He wouldn't give up. He would see this as only a minor setback. In disbelief I opened the pliers drawer and stared. Suddenly it leapt out at me - that shiny, chrome plated, jack-of-all trades, the Vise Grip! I tweaked, adjusted, and clamped it on the neck of the bottle, and what to my amazement would emerge besides the Ice Mountain Super Duper Vise Grip Light Bulb Changer!

Slowly up the ladder I went, but only half way this time. With my homebuilt IMSDVGLBC I reached for the sky. We soon had rendezvous and docking with the no longer functioning illuminator. A few turns to the counter clockwise and it was history. The new vessel of vacuum filled glass with its intact filament maneuvered its way into the socket until we had contact and glorious light! At least near the ceiling!

I climbed down off the ladder, off the truck bed, and admired our work. It was good. Macgyver would be proud. ;)