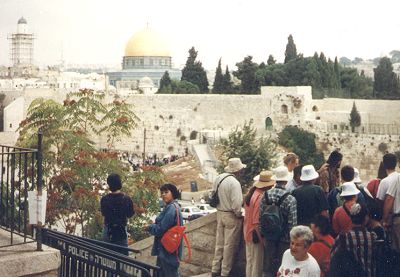 I have always been a logical, scientific person. Always I have enjoyed math and the other sciences. At the same time, I have been taught from birth that the Bible is the true Word of God. Often the sciences appeared to contradict the Bible, but my opinion has always been that the Bible is true and science will just have to "deal with it". After all, the world did not accept a round earth until thousands of years after Isaiah wrote in Isaiah 40:22, that God "..sitteth on the circle of the earth.." I believe that true science and true religion will always validate each other. The true physical and the true spiritual must co-exist perfectly.

Because of this, I recently went to Israel expecting to see the many places I had read about in the Bible, newspapers, and history books, but not really expecting it to affect my life in any way. We traveled across northern Israel to Galilee, seeing all the anticipated sights - the town of Nazareth where Jesus worked in the carpenter shop, the town of Capernaum where he chose his disciples, the Mount of Beatitudes where he taught and the Sea of Galilee where he walked. We stood on the Israel-Lebanon border. We spent a night in a Kibbutz, as helicopters monitored the skies above. We drove through the West Bank as military vehicles patrolled. It was interesting but not surprising.

Then came Masada. We gathered around our guide. At first she began to read words that may have been spoken centuries ago on this mountain. Soon the words were pouring from the heart of this Israeli mother whose children had served in the Israeli Defense Forces and whose family had huddled together under attacks of Scud missiles. Suddenly I knew I was not only standing on ancient rocks and ruins, but also in the presence of living, breathing Bible characters, continuing to live out the pages of God's Word. Our guide passionately related to us how new Israeli soldiers come to Masada and say, "Israel will never again have to choose between death and slavery". As I listened, I thought about the many times before when other children of Israel had been surrounded by their enemies and gone into battle knowing God was with them. 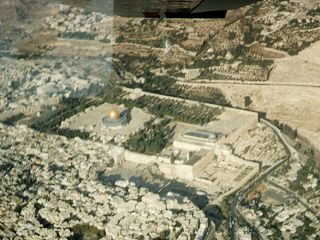 From here I went back up to Jerusalem with a new point of view. The next few days were spent knowing we were surrounded by living history, from the western wall to the shops of the holy city to the Mount of Olives to the old city steps where Jesus taught. We were walking into a book with page after living page, the modern within the ancient, the holy beside the pagan, and the beautiful among the repulsive. As I climbed the steps to that modern 747 airliner, I knew I would never look at Israel in the same way I had 10 days before.


Western Wall (Live) - The Passion of Christ - Back to home page...