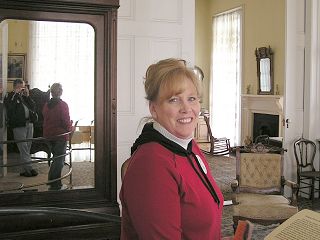 Let me tell you about Sue. I was at a place in my life where I had experienced two overwhelming disappointments in a short time, the end of a 29 year marriage, followed months later by the sudden death of a fiancée and friend. My fiancée was a lady who always had a smile and helping hand for anyone - regardless of what she may have been going through herself. I was devastated, but knew the best tribute to her would be to carry her smile with me throughout the rest of my life. I knew God had brought her into my life but I couldn’t understand why it was for such a short time. I knew God could bring another to share my life.

I made plans to move closer to my daughter for the family support. It occurred to me that if God was to bring someone else into my life in the future, I needed to be available. As I sat in front of the computer one evening, I came across an internet dating site. I felt that it might be a way to begin making a contact or two in the new town I’d be moving to soon. Little did I know that God had a surprise for me. In less than 24 hours I had heard from several ladies, including one calling herself Hockeymom.

Over the next few weeks, I communicated with a dozen or more ladies. I’d chat for an hour or two each evening, sometimes with several of them at once. There was sharing and small talk, but I never felt total openness and transparency in most of the messages. They helped me feel a little less lonely for a time and more confident about talking to new acquaintances, but it all paled when compared to the one or two e-mails I’d get each day from Hockeymom. I knew instantly that she was a 10 in a world of 2’s and 3’s. She had class. She typed little but said much. She was not desperate like the others. She was filled with confidence, not the boastful, arrogant kind, but the kind that came from knowing that God is her strength. When her e-mail arrived, everything and everyone else would fade into the background. I knew she truly felt the pain I had been through.

Hockeymom let me know that it was important that we meet soon. It was the chemistry test. We passed with flying colors and the rest is history. Over the next 10 months, I flew the 400 mile round trip to visit her at least 25 times. I can literally say I’ve flown nearly half way around the world for Hockeymom, and it was a bargain. There have been bumps in the road, but never a cloud that hasn’t been followed by the brightest of silver linings. I love her. She’s my Hockeymom and my Misty. I am blessed beyond words.