We must get in our spaceships and go

Risk takers and dreamers. If you're looking for a few, look no further than the signatures on the Declaration of Independence. The United States has always been, and I hope shall forever remain, a nation of dreamers and risk takers.

Like many Americans, I learned from an early age that nothing worth having comes easy. Dedication. Perspiration. Risk. These are the things. Vince Lombardi's exhortation about what it means to lie exhausted, victorious, on the field of battle. Teddy Roosevelt's aversion to those "timid souls" who, because they fail to "dare greatly" know neither victory nor defeat. Such is the stuff we are made of.

With the release of the Columbia Accident Investigation Board report, the "timid souls" and risk averse are with us once more. Human space flight isn't worth the risk, they say.

Having humans at the center of space exploration and development is what makes it all worthwhile. Anything less is pseudo exploration - interesting, but irrelevant.

I seldom draw social inspiration from sports writers, but Sports Illustrated's Frank Deford hit it on the head in a May 28 NPR interview, linking the achievements of Neil Armstrong and Edmund Hilary to a sense of purpose for the common man or woman: "What Edmund Hilary did 50 years ago changed us all, stretched us all, improved us all," said Deford. "Why? Well, at last because it was not just it (Everest) that was there; because he was there, we were," he said.

Amen, Frank. If Sir Edmund had been content to catapult a robot probe to the top of Everest, who would have cared? Nobody. But Hilary's jut-jawed smile and his jaunty "Well, we knocked the bastard off" carry human meaning across the ages, just as surely as Armstrong's "one giant leap for mankind." The fact that humans are there isn't beside the point - it is the point.

Certainly in the wake of Columbia and the CAIB report we have many questions to answer and much work to do before we return to space flight. The role and longevity of the shuttle, the configuration and utility of an Orbital Space Plane, potential near-Earth and not-so-near-to-Earth missions all must be debated and carefully thought through.

But not to go is not an option. As president Bush said in the wake of Columbia, the longing to go and explore space "is a desire written in the human heart."

Perhaps the stuff of our DNA was born in the big bang, and at some level we cannot comprehend it calls us back toward the stars. I don't know. What I do know is what people ask me when I speak in public - and it is all about people in space.

Oh, sure, they know about satellites, and yes, all that military space stuff is pretty cool. But when is the space shuttle going to fly again? When will we have someone on the moon again, or on Mars? From school kids to Rotarians, the eyes glass over. Don't tell me about the budget. Don't tell me about fixing the shuttle. Tell me when we'll have people on the Moon again, or on an asteroid, or Europa. Tell me when I can go; or my kids or my grandkids.

The space program only has meaning to people if it is about people. This is the lesson of Columbia, and this must be our memorial to her brave crew. The loss of the STS-107 crew of course was tragic, and should not be minimized. It is our duty to ensure it has meaning.

But here is what Sir Arthur Clarke wrote shortly after Columbia was lost:

"The conquest of the air took many lives -- though only a fraction of those lost during the millennia when the Oceans were opened up for navigation. As Kipling wrote: 'If blood be the price of Admiralty, Dear God we have paid in full'!

"Well, with Columbia and the earlier Apollo and Challenger tragedies, we are starting to pay the price of Astronautics, and inevitably some are asking 'Is it worthwhile?' A hundred years from now such a question will seem as absurd as criticisms directed at the importance of aviation, c1900."

In the eight months since Columbia was lost, more than 30,000 Americans have been killed on our nation's roads and highways. I have not seen a single editorial cry for the abandonment of automotive transportation. We know the risks. We get in our cars, and we go. 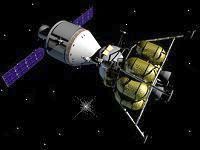 Space calls us. We must make no excuses. We must get in our spaceships - and go.