The Passion of the Christ

This past weekend my family and I went to see Mel Gibson's Passion of the Christ. The liberal news media had initially been quick to look at the movie through their politically-correct colored glasses, usually without even actually watching it, and come up with their version of what it was going to do. They predicted all sorts of social upheaval and evil actions by Christians. Once again, their stories were full of themselves and devoid of truth. 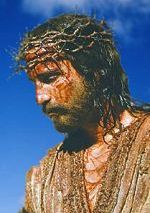 We know that the Word of God we read between the covers of our Bible every day appears as simple books, chapters and verses on the surface. But anyone who has studied it knows that it is filled with meaning that is applicable to thousands of situations going on in millions of lives. The third chapter of Second Timothy says, "16) All scripture is given by inspiration of God, and is profitable for doctrine, for reproof, for correction, for instruction in righteousness: - 17) That the man of God may be perfect, thoroughly furnished unto all good works." I believe that Mel Gibson has, by the inspiration of God, succeeded in bringing God's Word to the movie screen. In the same way that King James brought the Bible alive to English readers, Mel has brought the story of the Crucifixion to life for movie goers. Anyone watching The Passion of the Christ with an open heart will be profoundly touched in some way.

I can't tell you how the movie might affect you, any more than I can tell you what God's plan is for your life.

I also know that as we sat there, there was no room in that theater to entertain any thought of hatred towards Jews or anyone else. The intense love that Jesus had just shown filled the room to overflowing. There were times when His eyes met ours, and we were in His presence. If He couldn't hate those who were crucifying Him, how can we ever be justified in hating anyone. Neither did we think for a moment about the fact that the movie we had just seen wasn't in the English language. Mel Gibson simply transported us to the place and point in time where Jesus gave up His life for us. Mel didn't tell us about it, he showed it to us. We didn't hear about it, we experienced it.

I have been asked if the movie is good. I believe it is inspired and very well done - or should I say perfectly done. Yet, when I am asked if it is good, I can not bring myself to respond with a simple "Yes". To do so would compare it to other movies. There has never been a movie with the power of this one.