Brought to you by WinGS

Below is the text of popular e-mails often forwarded on the internet about the supposed death of the Doughboy:
The Pillsbury Dough Boy Obituary
Veteran Pillsbury spokesman, The Pillsbury Doughboy, died yesterday of a severe yeast infection and complications from repeated pokes to the belly. He was 71.

Doughboy was buried in a slightly greased coffin. Dozens of celebrities turned out, including Mrs. Butterworth, the California Raisins, Hungry Jack, Betty Crocker, the Hostess Twinkies, and many others. The graveside was piled high in flours as longtime friend Aunt Jemima delivered the eulogy, describing Doughboy as a man who "never knew how much he was kneaded".

Doughboy rose quickly in show business, but his later life was filled with many turnovers. He was not considered a very smart cookie, wasting much of his dough on half-baked schemes. Still, even as a crusty old man, he was a roll model to millions.

Doughboy is survived by his wife, Play Dough. They have two children, John and Jane Dough and one in the oven. He is also survived by his elderly father, Pop Tart. The funeral was held at 3:50 for about twenty minutes. 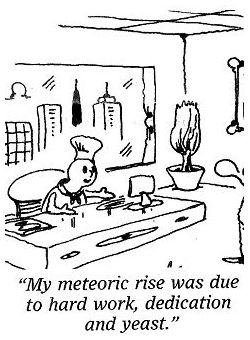 A woman named Linda went to Arkansas last week to visit her in-laws, and while there, went to a store. She parked next to a car with a woman sitting in it, her eyes closed and hands behind her head, apparently sleeping.

When Linda came out a while later, she again saw the woman, her hands still behind her head but with her eyes open. The woman looked very strange, so Linda tapped on the window and said "Are you okay?"

The woman answered, "I've been shot in the head, and I am holding my brains in."

Linda didn't know what to do, so she ran into the store where store officials called the paramedics. They had to break into the car because the door was locked. When they got in, they found that the woman had bread dough on the back of her head and in her hands. A Pillsbury biscuit canister had exploded, apparently from the heat in the car, making a loud explosion like that of a gunshot, and hit her in the head. When she reached back to find what it was, she felt the dough and thought it was her brains. She passed out from fright at first, then attempted to hold her brains in!

1962: NASA astronaut Scott Carpenter carries solid space food, developed by Pillsbury, aboard Aurora 7. Taking Pillsbury scientists more than a year to develop, the space food cubes were followed by other space-friendly foods, such as non-crumbly cake, relish that could be served in slices, and meat that needed no refrigeration.
Sue Seibel's Doughboy Character Collection